Pick Up YOur Feet

I love running outside! While running outside, my thoughts are so positive: Thank you God for giving me the ability to run. Thank you God for letting me live in the beautiful Ozarks. I love the trees, the creeks, the rocks. Now, running on the treadmill is a different story. While on the treadmill my thoughts are anything but positive: Is this thing broken? The minutes are flying by, but the miles are stuck…seriously they are not moving! Is it over yet! This is sooo boring.

So when David Murphy organized an IRC trail run in the Mark Twain National Forest for Saturday morning, I was ready for the adventure. My goal was to do 12 miles because that is what my marathon training plan had scheduled. David warned me that I would be spending a lot more time on my feet than usual because you have to go a lot slower than you would on the road, because of the difficult terrain. I was really hoping I could get in the 12 miles even if I had to walk quite a bit. 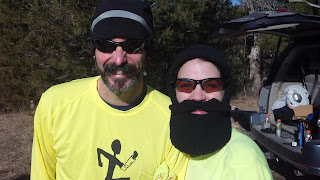 I was so excited and anxious I woke up practically every hour thinking my alarm hadn’t went off. Finally, 5:30 a.m rolled around. It was cold, but the perfect weather for a run outside. My parents, fellow Idiots Tim and Norene Prososki, picked me up and the three of us headed to the trail to meet some other IRC members. When I arrived I decided to try to liven up the group with this awesome mustache hat my husband Zack let me borrow. I was trying to look like Jon Wilson. Can you tell us apart?


The run started off great. There were 15 Idiots there. Some were very experienced runners, like David, Jon Wilson, Jared Smith and Ginger Taylor. Some were beginner runners like my mom and Stephanie Newsome, who ran some and walked some. It was really cool because the more experienced ones did a great job of making the beginners feel welcome. David ran all over the place, visiting with everyone.

Most of us were from Ozark County, but some had driven from Ava and Mansfield. Many of us had never ran on trails before. We were going at a pretty easy pace, though, and we all had time to visit with each other. I had a chance to ask Jared, who lives in Ava, about some of his previous races. He has ran some full and ultra marathons so I was quizzing him left and right. Well, I guess we got caught up in conversation because we lost the group. I wasn’t too worried because I’ve heard it is pretty normal to get lost when out running trails. Luckily, we ran into everyone and got back on the right path. This was such a fun adventure way better than running on the highway praying not to get ran over.

After about five miles it started getting harder though. I kept tripping over my feet, almost face-planting into gravel. I kept telling myself to be careful and pick up those lazy feet! I guess my legs didn’t listen because the top of my right foot caught on a rock and I went flying elbow-first into the rocky trail. As many times as I had stumbled and tripped that day, I was not shocked at all by this crash. I just laughed and jogged it off. I could tell my elbow hurt and it tore a hole in my brand new Nike jacket. Someone later told me that rule number one is to not wear clothes you care about on trails. My knee also hurt a little where I fell on it, but I was just so happy that I didn’t roll, sprain, or break an ankle!
Around mile seven there was a huge mountain to climb. (Seasoned runners would probably call it a hill, but to me it was a mountain). I huffed, puffed, and walked up the hill. David, who in a couple weeks will be running 100 miles in a trail race in Texas, zipped by me, and said “You’re walking up the best part!” I couldn’t help but giggle as I thought, “That dude is crazy! But, one day I would love to zip up that mountain just like him.”
Around mile 10 I was honestly thinking, “Oh Lord, are we almost done?” I had been out of Gatorade for the last few miles and I was getting really hungry. Jon Wilson offered me a gel but I didn’t have anything to wash it down with so I didn’t take it. Molly Ledbetter and Kelli Humphries ran with me; this was their first time trail running, too, and they were both having blister issues. I think out of our little group, we were ready to get back to the car and home to a nice hot shower. I am not gonna lie –  it was hard and I walked quite a bit, but I enjoyed every bit of it. Next time I think I will either carry two Gatorades or leave one somewhere along the trail.
Once we got back to the car I took my jacket off to check out my elbow. As I pulled it off, a chunk of skin tore off with it..OUCH! Here is a picture of the damage. 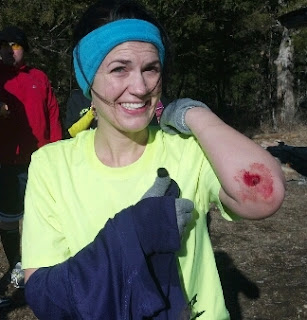 Running on trails was an amazing workout. My clothes were soaked with sweat. I seriously think I could have wrung them out. My sports bra was so soaked when you looked at my jacket the two sweat circles made it look like I was lactating! I couldn’t believe nobody told me how big of an IDIOT I looked. I am going to start adding trails into my running schedule way more often. Here is a group shot of all of the awesome IRC members who showed up to run the trails. 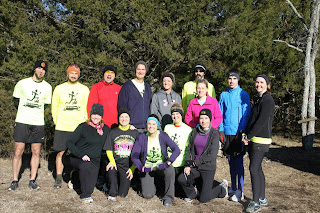 David is planning an IRC Skunk Run March 17. It is going to be a ton of fun! Details haven’t  all been worked out yet, but it sounds like we are going to start around 8a.m and you just log as many miles as you can until around 2p.m.. I plan to run a few, eat a hot dog and go out and run a few more, eat a S’more, run a few more should be a ton of fun. I think there will be awards given. I’m betting I could win The Most Blood Shed. I hope a lot of IRC members get to show up. I love meeting everyone. IRC members are the best so funny and supportive. I guess I better run some more trails before then and work on picking up my feet. Hope to see everyone there!
~Jenny Yarger~


Jenny is currently training for her first marathon while raising money to help the family of 7 year old Cara Hawxby as she undergoes treatment for Acute Lumphoblastic Leukemia. Read more about her journey and/or donate at Running for Cara.

Be an Idiot- Get the 1BandID

Be Your Own You: Use The Right Measuring stick

No Replies to "Pick Up YOur Feet"