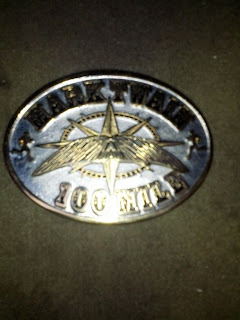 The Mark Twain 100 mile endurance race is four, twenty-five mile loops, on the Berryman Trail about an hour south of St. Louis, Missouri. This was the second year for the event and I did not know much about it other than it shared a portion of its route with the Ozark Trail 100, which I have heard was not an easy course. The race met two important selection criteria. 1) I had the day off. 2) The belt buckle was pretty obnoxious. I mean seriously a mustache???

My failure to plan became more apparent on Friday morning before the race when Daniel Roy reminded me that we would be setting up camp on Friday the 13th. In an effort to save a little race money I had opted for a tent rather than spring $50.00 a night for the local hotel special, so I had to make sure I packed the essentials….After digging my coveralls and Jason Voorhees mask out of the attic I was ready to go.
After arriving at the campground we got camp set and visited with some of the other racers. I decided with my limited knowledge the night before the race would be a great time to get the inside info on the course and competitors. Upon concluding the string of horror stories I heard about the race I was told I could go 200 yards west and take a look at the trail and get a good picture of what I was in for. I snickered, waited for everyone to go on about their business and snuck off to get a glimpse. What I found was a nasty brutal mess of rock, root and hills. I had decided to make an adjustment in my race strategy.

Funny thing, at this point I got a little nervous. I knew I bit off more than I could chew. After being given a fine instruction on camping 101 from crew member and pacer Derek Glos we got camp going and I decided “If this course is going to take me down I am going to at least have fun” So I threw on the Jason costume walked around the campground, attempted to scare Derek, drank some beer, and got nicely scolded by the neighbors. Apparently people like to sleep before long runs. So we packed up our junk and went to sleep.
I have been told I ran a smart race… However, what really happened was this. I showed up to the start line after missing the pre-race pep talk with 6 minutes to go. I looked around at all of the real runners and realized my place was in the back of the pack like a lot of runners I didn’t feel worthy of this race. I was, for once, completely out of my element. I mean, I have run ultras before, but this was the real deal and these guys were looking strong. Wrong mindset, right decision.

The first loop was a good opportunity to learn the course. Going into the single track we were bottle necked for several miles in the beginning. I took advantage of watching both, how other runners were running the race, and also planning a little better how I was going to keep running the race. The first 5 miles were mostly uphill including a very large hill that was going to kill me on loops 3 and 4. The middle was mostly runnable but technical. There were a lot of washed out areas, roots, and downed trees.

At the back of the pack not only did I meet some awesome people and get to hear some great stories from ultra-running veterans, I didn’t really lose too much time. I was only 30 minutes behind my original goal, however; I saw something, fatigue, but not mine. Coming in off the first loop people were starting
to look a little tired but I had watched my speed and stuck to all of the rules of thumb. Keep moving, don’t waste time at the aid station, and take the uphill portions slow; all a first in my book.

As I came into the start-finish area I met my crew (consisting of my wife and Derek, at the time) and they had everything I needed to start the second loop all ready to go. Starting to feel more like myself I asked, how am I doing? I can’t remember exactly how it was worded but I got the point, It didn’t look good. I knew I had wasted a lot of time playing ultra-marathoner, pacing myself and enjoying the trail. Time for plan B, finish this race out with a respectable time and don’t overdo it.

Beginning the second loop I was about mid pack. I shot for a little under 5 hours for the loop. I really felt more familiar with the trail this time around. Many of the climbs were slow and gradual with a switch back “here and there” as Murphy would say. The second loop was semi uneventful I found a country music station on my am/fm radio (I’m old school) and got about 4 songs the entire loop due to the fact I was in the middle of nowhere. I got into a groove and slowly passed several runners. As I came through the start finish line the race director was there to give me a high five and a looking good, and I had several surprise visitors. I had family show up and most of my crew that came to help and cheer on.

Finishing up the second loop was a relief, at this point I was able to pick up my first pacer Derek Glos. This would be Derek’s first experience running a trail like this and also his first experience pacing in a 100 mile race and he seemed pumped. His excitement really motivated me and I did not want to let him down. My largest fear in the whole race was to have someone come out and watch me do the zombie walk of death for 7 to 8 hours. Derek did an excellent job keeping me on pace. Our goal for the 3rd loop was a 5:30, I believe we did about 5:45 and were in roughly 5th place by the end. Derek played an extremely important role. First, he is a funny dude and kept me in good spirits for a long time. Second, he paced me perfect for the third loop. If I would have gone any faster, I would have burned out. If I would have gone any slower I would have not been happy with my finish.

Coming out of the woods I and into the Start/Finish line I had mixed emotions as I saw who was going to become my best friend and worst enemy for the next 25 miles. I saw Derek and Murphy have a quick discussion while I was dipping a bagel sandwich in chicken noodle soup and gagging on every bite. Then I got the usual “c’mon Jones, lets go”. I slammed the bagel and took off. I was planning on easing in to this loop at about 6 or 7 hours if I could. Survive and have an easy sub-24, but Murphy had another plan. One thing about David Murphy is that dude is full of motivation and always has the right words of wisdom and encouragement at the right time.

We left in 5th place and I thought about walking up the first set of switch backs but with Murphy leading the way we climbed through the hills a little more quickly than I had the first three times. I told Murphy that the first large hill was at mile 4 or 5 and we would have to slow down, have a steady climb , but as we approached it I had a different view. Thinking back to my earlier prediction on how this hill would destroy me by loop three I decided to do what any good runner would… We ran it and ran it hard. This set a good precedent for the next few miles.

Coming in to the second aid station we had caught a couple more runners and were on the heels of second place. There I had two more surprise visitors, Shannon Cochran and her husband and my usual
pacer and training partner Chris Cochran. It was fantastic seeing them out there at midnight but I didn’t know if I was dreaming or hallucinating. So I had a little caffeine and food realized it was them, had a quick convo…”Jones hurry up lets go” Murphy hollered, again pushing me out of the aid station. The next few miles were brutal. Unfortunately by then I was utterly fatigued so most of Murphy’s wise words will remain on Berryman Trail, but I know many of them got me through the next few miles. Although I was in bad shape I did pass our leaders briefly taking second but losing it. I am not exactly sure what happened but somehow the second place runner was having pacer issues.

As we pulled into the last aid station Murphy had to do some IRC public relations and I am sure autographs, which was okay because I needed a few seconds to regain my composure. Murphy and I both picked up a couple of cups of the best potato soup on the face of this planet…I recommend the place if you can find it, aid station 4, and we were on our way. 2 minutes behind second we were pushing hard. The quote “I was flying by trees and rocks like they were standing still” comes to mind. At this point no matter how hard I pushed I could only run about a twelve minute pace tops, but again Murphy came through with the perfect word of wisdom…Beer! We dropped down by the dry river bed and then climbed slowly to the finish.

As we approached the finish we saw a small group of runners and both looked at each other and Murphy told me to get em’. I mustered up the last bit of energy I had to look like I was strong coming across the finish and attempt to pass one last racer. As I approached the runners put up no effort to contend with my blistering pace and I felt a little disappointment. Although this was one of the runners I wanted to pass, it wasn’t the one running the race. The pacer looked at me probably knowing that I did catch his runner who crossed the finish line 9 minutes ago.

I have the utmost respect and appreciation of all my crew, pacers and visitors. Stefani provided support the longest, throughout my training and is a racing crew genius when getting me prepped. Amanda came out and supported me with the race but very importantly supported Stefani! Derek kept me motivated through one of the hardest loops of the run. Murphy continues to teach me about Ultra running like a Jedi Master, but most importantly…This time he turned what was going to be a casual run into a legitimate race!

The race was good for a sub 24 buckle, a PR, 3rd place overall and the 4th fastest time run on this trail to date.

No Replies to "Potato Soup and Beer"