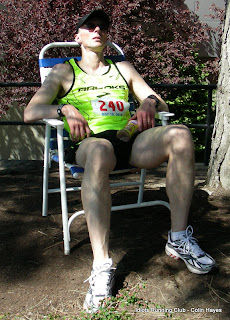 One of my most memorable “Idiot Moments” came during a 22-mile training run. The date was April 19th, 2010. This was my last 20-miler before my first marathon (less than 4 weeks away). It was an unseasonably warm 78 degrees that day. Yes, you know where this is going. I was carrying a 20 oz. bottle of water and some gels. I was running on a paved bike & running trail, doing an out-and-back. I knew it would be hot, so I started drinking early and often.

At about the 4.5 mile mark, there was a water fountain. My bottle was half empty (half full?), but there were some cyclists refilling their water bottles. I could stop and wait to refill my bottle, or I could keep on keeping on…with no more water opportunities until I hit this same water stop on the way back (17.5 miles into the run). Of course I stopped, right? I mean, I’m not an IDIOT, am I?

My impatience drove me on and, at about 9 miles, I knew that the vultures circling overhead were licking their beaks. The pace slowed, and the walk breaks started at about 13 miles. Many of the trees that lined the trail started looking like Disney characters. People that were cycling/running/walking toward me were paid assassins, waiting for me to divert my eyes so they could quickly knee-cap and disembowel me. The circling vultures were joined by flying gargoyles and, oddly enough, winged versions of Pat Sajak and Justin Beiber (my nightmare had turned into a pop-culture version of Dante’s Inferno).

When I finally reached the aforementioned water stop, now at mile 17.5, it was too late. My tongue had swelled to the size of a grapefruit, and my internal organs had sucked so much water from my brain that the x-ray of Homer Simpson’s tiny brain would have put me to shame.

I managed to run/walk/limp the final 4.5 miles in a sweaty fog, somehow finding my truck and, even more unexplainable, remembering how to actually drive it. A cold bottle of chocolate milk awaited me, which was inhaled like a white line at a Lindsey Lohan “Welcome Home” party. Except my nostrils weren’t involved. Much.

Once home, I sprawled my salty body across the floor while my wife heated up the only thing that sounded good to me at the time — a bowl of common sense, er, tomato soup.

I obviously lived to run another day. With more water.

So yes, I’ve earned my Idiot Wings, which I wear proudly on my smelly running shorts.

No Replies to "22 Miles With Beiber, Sajak & Lohan"